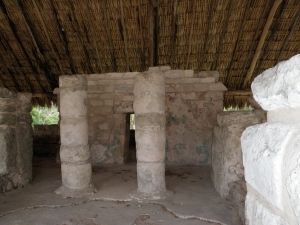 My wife and I got back from our first cruise awhile back. We were on the boat for four days, it was a neat experience but the best part of the trip was when we went and saw the ruins of a Mayan holy site on the island of Cozumel. We could see the ancient fading paint still adorning the wall in the building behind the high priests sarcophagus. My wife said, “Do you see the hand prints?” I did, the color was a reddish brown and around it were blotches of reds, browns, yellows, and blues. The guide said it was the remnants of a mural of the goddess of fertility Ixchel, he then pulled from his pocket a handkerchief sized weaving of her representation and told us that’s what was on that wall.

We continued the tour and we were shown the ancient, now nearly rubble, road that lead from the coast miles away to this temple complex. People would use that road while making pilgrimage to the site . We could see the stone road into the distance, people had cleared the surrounding jungle from around the site and the road. The road was torn up, as you can imagine it would be after centuries of non-use, except where the entrance to the complex over the road still stands, there the road was in nearly perfect condition.

Seeing the paint and the hand print on the wall, the road where untold numbers treaded, to pay homage to a god, and to seek her blessing; these thoughts entranced me, entrance me still. The tour guide said that they who came to seek the blessing of Ixchel must be put to the test “as the people in the military are put to the test to prove themselves.” I wish I had noted what the tests were but thinking about it I remember think they sounded grueling and simulating death. The whole experience was amazing.

The cruise ship reminded me of the Tropicana Casino in Vegas. Not the nicest of joints and getting a little older, but there to get the party done. Just don’t look to closely at the grime and you will have a fine time. That should be Carnival Cruise Line’s advertisement.

Here’s something I wrote on the boat:

I still do but now I call

motion beacons me to

Looking into the depths

is remembering the insignificance

of one life as an itty-bitty drop

in the wider sea of humanity.

The fluidity of the currents

tosses my mind to places

of the sea’s desire, I am a slave

to the pull of its graces.

For the first time in my life I can’t see land.